The place of the proper name

How to speak about a work that attempts the silence? A work that summons and embraces the ultimate secret. The mystery of all mysteries: God. Inaccessible other because absolutely otherworldly. How to speak about the unspeakable? A work that would undertake such an enterprise would lie on the edge of language, at this very limit of the sense which would constitute the archi-trace of all possibility of signification. It would be a first writing, absolutely secret and yet, translatable to all languages because absolutely universal. Inevitably, to talk about such a work (or a project of work, since such an endeavour is a constant work in progress) is impossible when to talk means to communicate a definite sense. Or if to talk brings in a suitable sense. Impossible because senseless in itself. Nevertheless, we can, in front of this work, receive and meditate on what it gives us to think about. Because even though it is silent, even though it attempts the secret, opens on the unspeakable, it pushes us to reflect. To reflect on the other and the relationship to the other and to otherness, in all the aspects of this relationship (Metaphysical, Ethical, political).

Haythem Zakaria’s artistic project can be perceived as an attempt in this direction. If we stand before his drawings, we see lines. Straight vertical lines grouped according to their size or the distance separating them, arranged with extreme precision, disposed in beams or in shapes that reminds of an unknown product’s barcode. Linked to each other with new lines crossing them. This is the description at the limit of these drawings. At the limit of the classical ekphrasis and the description that “enhance” a work of art. However, it is as though the drawings themselves bring us back to the economy of description, in order, maybe, to push us to reflect on our vision of a work, on our regard which “enhances” things standing before him. As a matter of fact, the lines which are digital values (grouped in unit) limit the alphanumeric values of some names of Allah. A whole Islamic mystic tradition quantifies or codifies the names of God. It turns them in some sort of digital values. As if it was aiming through such a process to bring in the absolute which lies behind these names: the unspeakable, God itself. To designate or to point at the other, beyond languages, beyond their differences and historical or factual determination. And this implies the search of an absolute and universal language, maybe the language of God itself, to which and in which he responds and comes to us.

“And to Allah belong the best names, so invoke Him by them. And leave [the company of] those who practice deviation concerning His names. They will be recompensed for what they have been doing.” [1]

The best names, where the best manifests itself emphatically. Beauty which is the bright truth itself. These are the names of God. The search for digital values to these names would be an emphatic overbid (is this not the enthusiasm of a religious feeling) which tries to reach the closest possible, beyond its names, the unspeakable. But, what does to enhance means here? What do we do when we assign a digital value to a name? Especially when this name is a unique name, God’s name; the most unique name. These questions are extremely important and urges us to reflect about every relationship to the other from the perspective of the value. What happens to us when our relationship to the other, to his unique name, the one to which he responds and has to respond, when this relationship is built on the value? What does the value mean? Of course, classic economical definitions (value in use or exchange values) are insufficient because they are determined according to presuppositions related to values that surpasses and fully determines them. Ethnic definitions (The Good) are more global but are also insufficient because determined, in their turn, by metaphysical definitions. Nietzsche has seen perspective in the value, the point of vue of the desire for power which is always eager for more power in determining its scale of expansion. This gives us already a clue on the juncture between all fields of existence (economic, ethic, political, scientific, artistic) through the determination of the value as perspective.

Let’s get back to Haytehm Zakaria’s Drawings. The names of God are not represented. Even in writings but delineated according to a determined order. An extreme scale of measure (because digital) which is the limit of every representation. A line: constituent element of every form and first element of the determination. The echo of mystic enthusiasm which is drawn by the artist makes us think about what constitutes all forms of mysticism. This desire of reaching the other in a radical way till the extremity of language, to access its delineation and digital value makes us think about the risk that every desire for the other, to name it and to see it, to conceive it would turn into a calculating will and perspective. Capitalist fury may just be this! Putting everything in perspective and to reduce the other through the power of valuing measure. The other (God) is now part of a measuring unit ( Isn’t it the proper definition of some interpretation of monotheism!) and placed in the horizon of the will that uses it and exchange it: that masters it. In the search of accessing the other, the risk to abolish the difference (thus, the notion of otherness in the other) remains present. This risk is even present in every relationship. May be this why it is difficult to make a radical critic of capitalism and even harder to get rid of it. We can see in the lines a universal bar code. An exchangeable matrix of information to which nothing can resists or escape from. And as well as a bar code is read by a machine, the values calling for the other are only readable by a program within each of us. We become a reading program in a generalized values’ system.

However, let’s not hasten and let’s dwell for a moment on theses drawings. Let’s stand in front of their sobriety (Elegant and refined) and try to go further. The simplicity of their arrangement forces us to go beyond our first look. As a matter of fact, the lines suddenly reveal the space holding them, not only the working plan but also the empty space where they stand. An unshaped space and not able to be shaped and without which those lines wouldn’t appear. The space that gives birth to the line. The space where is drawn the extreme limit. The space where is drawn the name, where calling the other is possible. This space that could not be measured but which constitutes the condition to the possibility of every measurement and calculation. This space that can be referred to as Khòra[2] or another proper name. This space will always elude the name because it holds it and is not determined by it. This space hosts without invocating and without calling, absolutely hospitable. It can be the only place where we can meet the other in every aspects of his difference. This very space, Haythem Zakaria’s drawings reveals it to us without defining it, without determining it. In the way of negative theology, they orient us towards this space depleting our look by denuding it.

[1] Coran,  7, 180 Trad. The Quran Arabic corpus. [2] See Platon, Timée et Jacques Derrida, Khòra [3] Negative theology or Apophatic theology, is a theological approach that describes God by negation, speaking of God only in terms of what He is not (apophasis) rather than presuming to describe what God is. 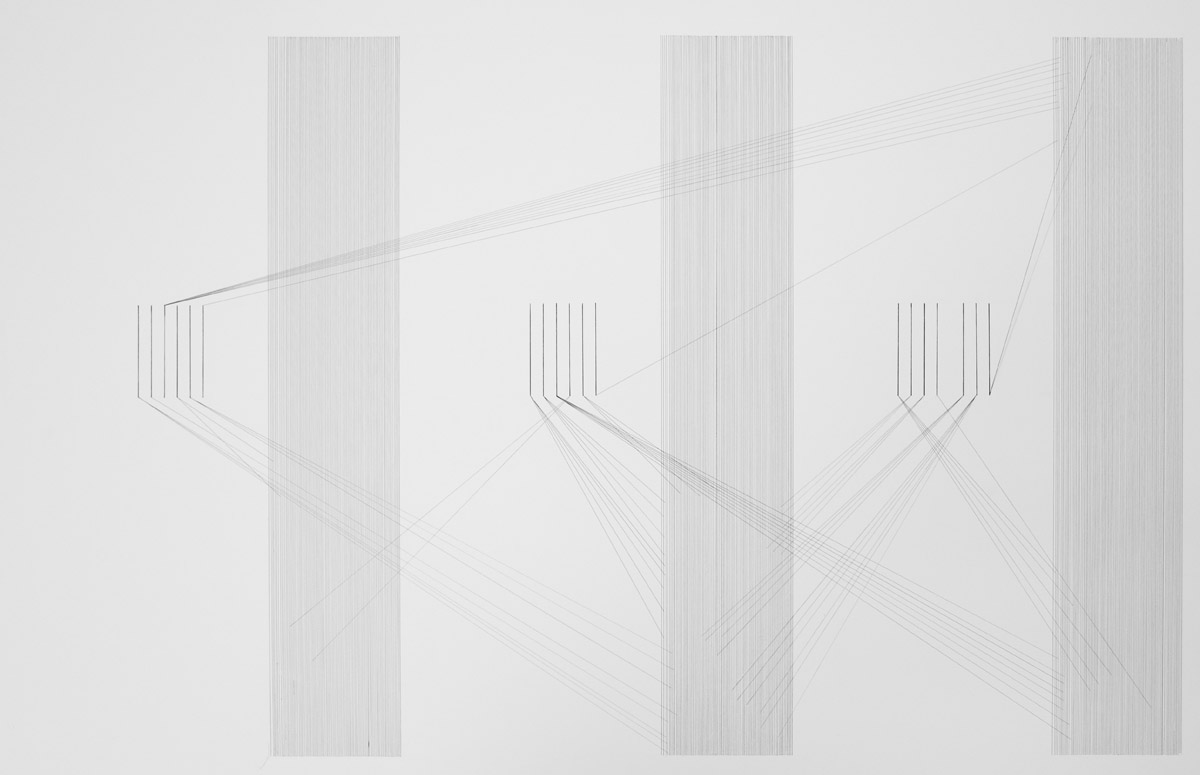 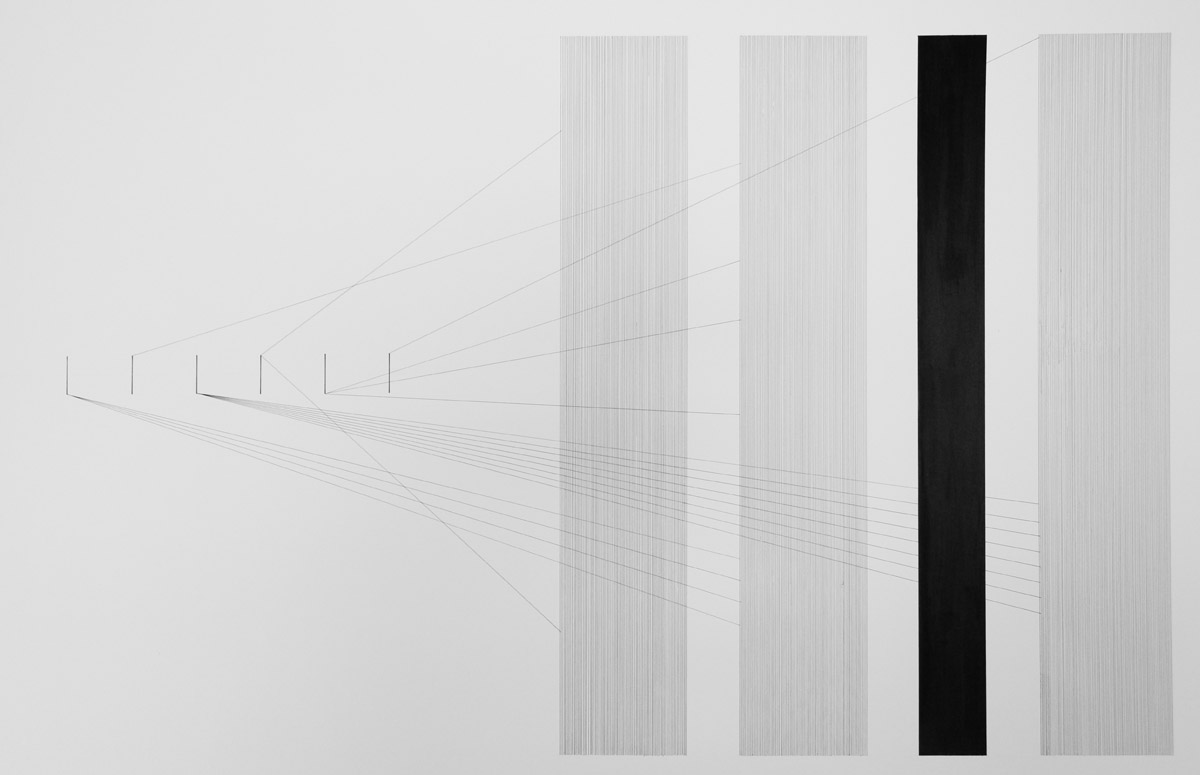 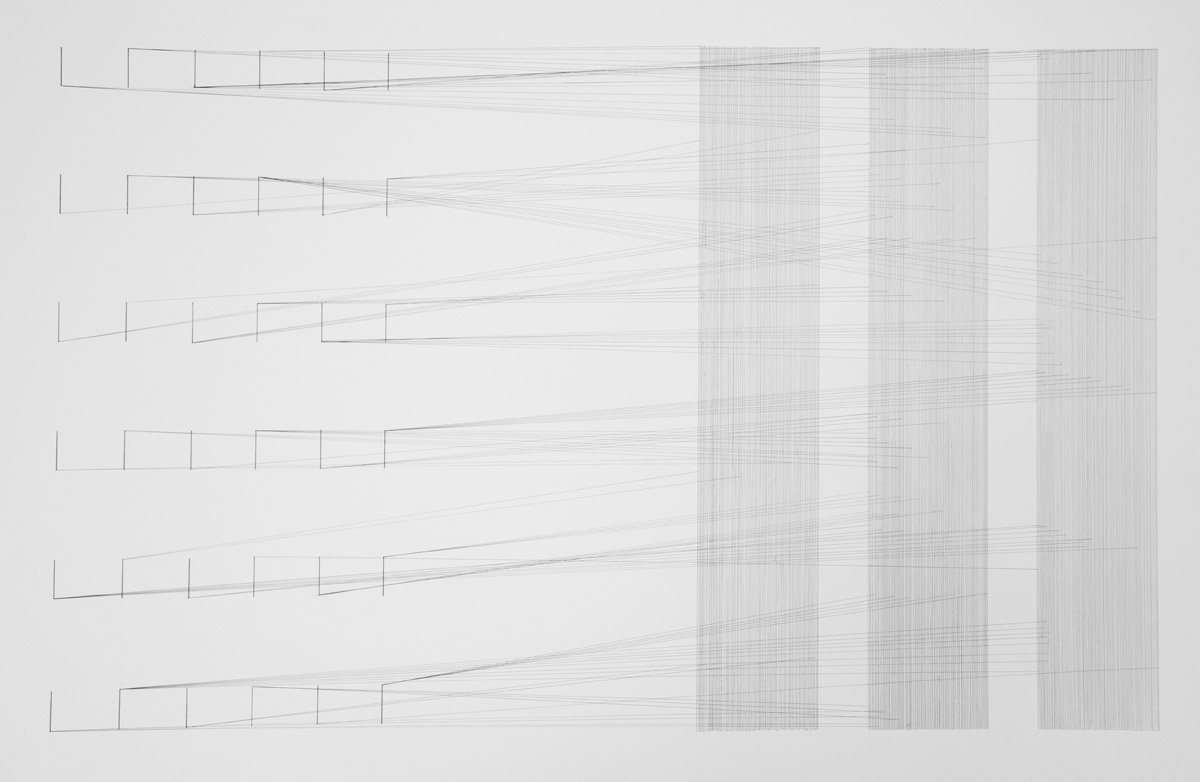